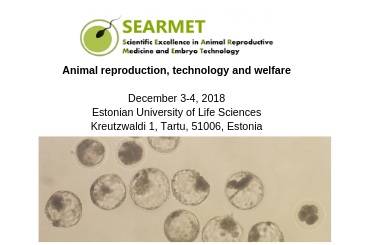 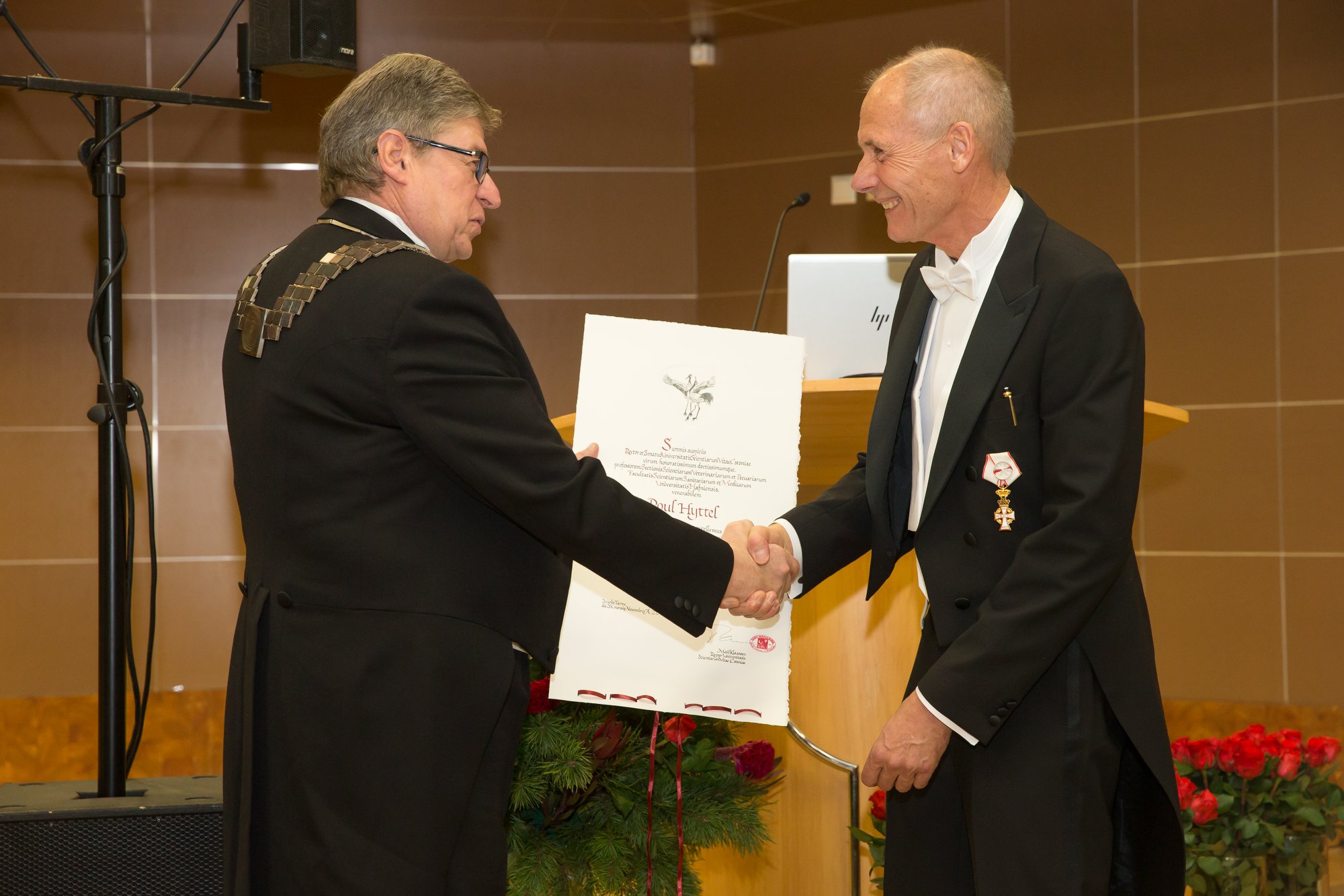 On 9th of November Estonian University of Life Sciences celebrates its anniversary – 170 years of veterinary education in Tartu.

We are more than happy that during this year’s celebration our beloved project partner Professor Poul Hyttel from University of Copenhagen will be conferred as Honorary Doctor.
After his conferment Professor and Honorary Doctor Poul Hyttel will give an academic lecture titled “Stem cells – from animal to man and back again“. We invite you to celebrate with us!
https://www.emu.ee/…/festive-meeting-and-the-following-rec…/

Professor Poul Hyttel is an internationally recognized scientist on the field of biomedicine, animal and human stem cells and early embryonic development.

Prof. Hyttel’s current research activities include pluripotent porcine and human stem cells as well as embryo-technology in cattle. The major projects focus on (1) establishment of human patient-specific neural in vitro cell models for neurodegenerative disorders by the use of induced pluripotent stem cells (iPSC); (2) basic studies of porcine and canine iPSC for the development of the pig and dog as translational models for iPSC-based cell therapy; and (3) in vitro production of bovine embryos, where the technologies for oocyte maturation, fertilization and embryo culture in vitro are optimized and quantitative genomics is applied for precise selection of high quality embryos. Professor Poul Hyttel is a best example on how the “One Health” principle can be followed in research: by comparative animal and human biomedical research on molecular mechanisms, diagnostics and treatment of diseases.

Since 1985, Prof. Hyttel has attracted more than 19 million € in for research projects. In 2015, he has received a 3.3 million € grant from Innovation Fund Denmark to support BrainStem, a transnational stem cell center of excellence in neurology of which he is the director. Advanced stem cell technologies are used to re-program skin cells from patients with Alzheimer’s and Parkinson’s diseases to diseased neurons with the aim to have a close look at the molecular mechanisms behind neurodegenerative diseases. The diseased cells can be also used to develop better diagnostics and to test new drugs.

In 2017, he was awarded another large grant from Innovation Fund Denmark:  nearly 2 million € for the research on in vitro embryo production and genomic selection harnessing Danish elite cattle breeding (EliteOva).

Professor Poul Hyttel is author of more than 270 refereed international articles. In addition, he is an excellent science communicator with more than 100 popular publications and many interviews. He is also a talented illustrator of his books and research articles.

Professor Poul Hyttel is successful mentor of the new generation of scientists. He has been the principal supervisor of 25 PhD students (2 on-going programs) and co-supervisor of several PhD students. Despite of the intensive research work and administrative responsibilities, he continues to teach veterinary students in animal reproduction, anatomy, histology, cytology and embryology.

Professor Poul Hyttel is recognized leader of academic societies and networks. He is Founding Diplomate of the European College of Animal Reproduction. In 1997-1998, Professor Poul Hyttel was President of the International Embryo Transfer Society, in 2011 he was awarded Doctor Honoris Causa, University of Antwerp, Belgium and in 2015 he was knighted 1st Class Order for his services to Denmark.

Professor Poul Hyttel has organized many international scientific events – conferences, seminars, workshops, summer schools; he is a leader or member of different expert commissions and decision-making bodies. As an expert in many fields of research, he has been a referee of 17 highly ranked research journals.

The first contacts of Professor Poul Hyttel with the scientists of the Estonian University of Life Sciences date back to 90 ´ties when senior researcher Ülle Jaakma had a chance to participate in the international summer school on embryo-technology in Copenhagen, and later, to study bovine in vitro fertilization techniques under the supervision of Danish colleagues at the Department for Animal Reproduction at the Royal Veterinary and Agricultural University (KVL). The collaboration became more active since 2002-2003 when Dr. Jevgeni Kurõkin worked as guest researcher in KVL and obtained knowledge in ultrasound diagnostics and oocyte retrieval; and Ülle Jaakma examined ultrastructure of bovine embryos under the direct supervision of Poul Hyttel.

The collaboration continued with the Professor Poul Hyttel ´s visits to Tartu. Poul, as an embryologist and developmental biologist, is inspired by the spirit of Tartu as a university town and place related to the famous K. E. von Baer, who discovered the mammalian egg cell. Professor Poul Hyttel has taught numerous lectures within the frames of doctoral summer schools „Postgraduate Course in Bovine Reproduction“, (2003), „Cloning and stem cells“ (2013) and “Embryology” (2014), and supervised Journal Club of PhD students during the summer school.

Professor Poul Hyttel has a remarkable role in preparation of the Horizon 2020 Twinning project proposal SEARMET in EMÜ, and since 2016, in carrying through the project activities. The aim of SEARMET is to improve the scientific knowledge and innovation capacity of the Estonian University of Life Sciences in the linked fields of animal reproductive medicine and embryo-technology. This will be done by strengthening collaboration with the high-ranking foreign academic institutions: Sheffield University and University of Copenhagen, where the latter is a model of excellence in the in vitro production (IVP) of bovine embryos and in induced pluripotent stem cells (iPSC) research. The scientists at University of Copenhagen have performed technology audit in the embryo laboratories of the Chair of Animal Breeding and Biotechnology, the Institute of Veterinary Medicine and Animals Sciences. Their recommendations have contributed to the improved oocyte fertilization and embryo culture protocols and higher blastocyst rates for the embryo transfer. Regular practical trainings were performed both in Tartu and Copenhagen. Poul initiated also collaboration with the IVF Biotech, where researchers at University of Copenhagen have formed a scientific team behind the development of new culture media. With the great support of Poul Hyttel, a joint research plan for the development of efficient techniques for the in vitro embryo production for the benefit of breeding organizations like Viking Genetics will be designed. Joint effort have been made to apply for the Marie Skłodowska-Curie Innovative Training Network (ITN-EJD) and prepare for the next Horizon 2020 calls in 2019.

Professor Poul Hyttel is an extraordinary personality not only because of his success in research but also due to his personal qualities. His friendliness and helpfulness, ability to explain important topics in a simple way have made him one of the favourite professors on his field both in Denmark and in Estonia. Professor Poul Hyttel is also internationally highly recognized by the scientific community inspiring with his ideas and personal motivation. His expertise has greatly benefited the development of embryo-technology research in Estonia and international collaboration of EMÜ with the European universities. We look forward to the continuation of joint activities.